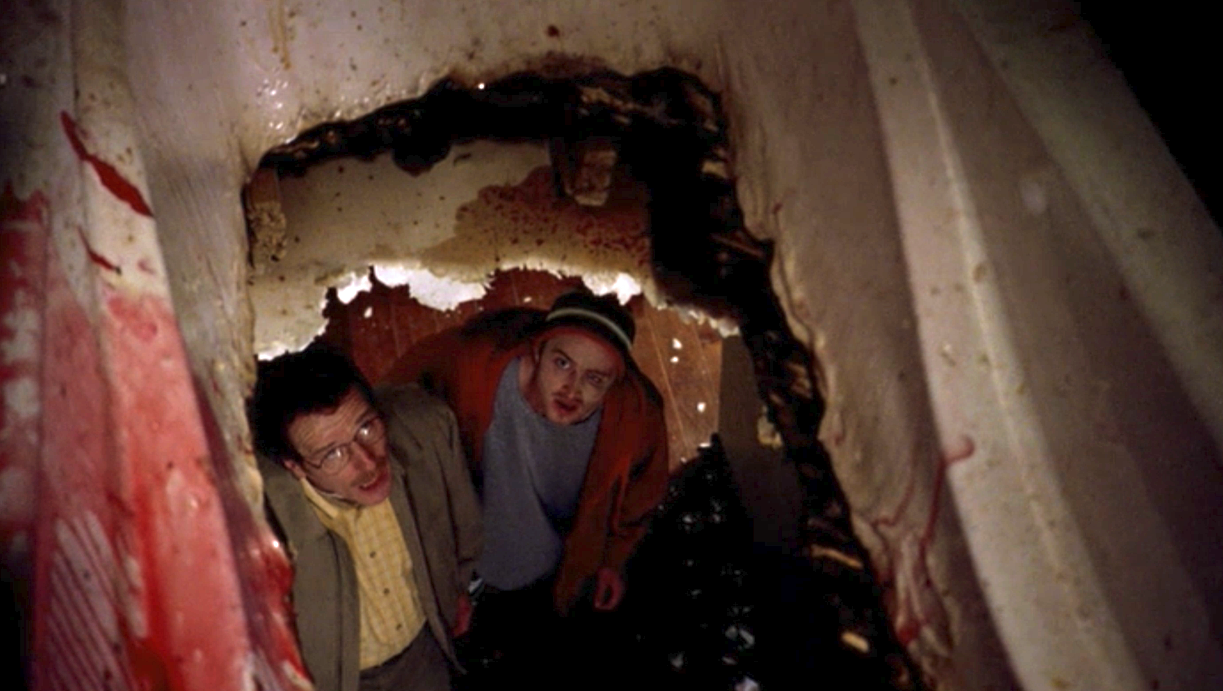 Most shows tend to gloss over some of the less glamorous aspects of a plot to get to the next action scene.  I mean, who wants to see a protagonist deal with his wife about his secret in the second episode?  Who really wants to know how the main characters dealt with the two bodies from the climax of the first episode?  Who the hell wants to spend an entire episode watching characters having emotional responses to what they did in the first episode?   Well seeing as this is the episode that hooked me on Breaking Bad, I can definitely say “me”. 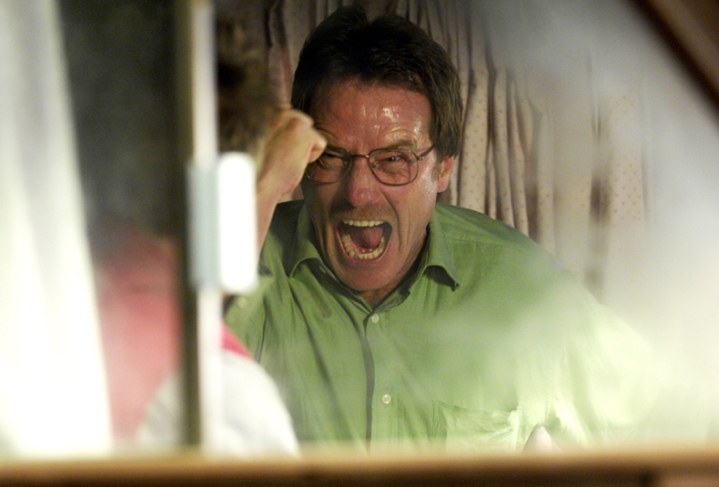 Let’s talk about our feelings.

The pilot episode of Breaking Bad was a great introduction to the show but it didn’t quite grab me.  It had a fantastic plot and a very good through-line but didn’t have that extra level.  Walt’s cancer diagnosis, Walt and Jessie partnering up, and the climactic action scene are all strong but in a very direct, plot-advancing way.  This episode, on the other hand, doesn’t advance the plot so much as it stops to deal with the repercussions of what happened in the pilot.  Most shows would have just transported Walt and Jessie to a few days in the future with the bodies miraculously taken care of.  Or they would have Skyler completely ignorant of her husband’s bizarre behavior.  Or they would have had Walt and Jessie back to cooking meth this episode just to keep the pace up.  Basically, this is a slow episode….and I LOVE it.  This episode really solidified in my mind that this was a unique show.

By slowing things down, we really get to know Walt and Jessie in this episode.  As viewers, we know Walt’s journey is not going to end because of this situation with Crazy 8 and Emilio so technically, an episode dealing with just this situation is “a waste of time”.  But without this plot, we wouldn’t have gotten to feel the pressure that is on our two heroes.  I mean, the tension in the coin flip scene for who gets to melt Emilio and who has to kill Crazy 8 is off the charts for a scene where neither Walt nor Jessie are in physical danger.

Walt may have decided to become a drug manufacturer but he definitely wants to do anything possible to avoid having to murder someone in cold blood.  He tries to rationalize his situation by claiming a “businessman, a man of business” would be able to see past vengeance and go on his merry way after being released.  Then once Jessie shoots that down and Walt is chosen via coin flip to kill Crazy 8, we get a great scene where Walt pantomimes various murder methods but can’t even do that convincingly.  Next, he makes things even harder on himself by humanizing Crazy 8 by feeding him and keeping his hands sanitized (GREAT gag with Walt rolling the items across the floor from off-camera).  Finally, Walt goes back to the extremely relatable course of action–procrastinate and say “ahhhhh I’ll get to it tomorrow”.  Fantastic acting throughout from Bryan “proCranstonate” (sorry, I couldn’t resist). 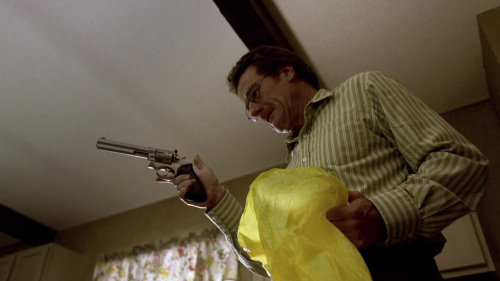 “I could get started on this now but then I wouldn’t get to play with this great bag!”

Jessie was solid in the pilot but here, his character is really developed as we realize that he’s not just some deadbeat kid who is completely at home in the drug world.  If anything, he is more out of his league than Walt is.  Walt may be trying to rationalize his way out of things but in the end, he pretty quickly concludes  that they need to kill Crazy 8.  For Jessie it seems like the thought didn’t even cross his mind until Walt brought it up.  Meanwhile, Walt is able to (more or less) live his life where only Skyler seems to notice that he’s acting weird.  Jessie on the other hand is all nervous energy which we see with his hilarious AT&T phone call, his need to get high before taking care of things, and his awesome soliloquy as he drags Emilio up to the bathroom.  Great contrast between the two of them and great chemistry between Bryan Cranston and Aaron Paul.

One weakness from the previous episode was the supporting characters.  Here, the episode smartly cuts out Hank and Marie to focus more on Walt and Jessie’s plight, and to give Skyler some very strong scenes.  It is very refreshing to see her being an intelligent character who right away, knows something is odd about her husband.  I’m used to supporting characters being blind when it comes to the main plot just to make things easier on the characters and on the writers.  Here Skyler immediately takes action tracking down who Jessie and calling out Walt on his crap.  It felt very realistic to me the way she confronted him about Jessie; it wasn’t a big scene or anything.  She just saw an opening and asked Walt straight-up.  Walt’s series of reactions to Skyler were solid, transitioning from shock and fear, to feigned apathy when he lies about smoking pot, to almost a sense of giddiness when he takes the opportunity to tell Skyler to climb out of his ass.  Skyler was great this episode and added to the dramatic tension in a naturalistic way.  Her only scene that didn’t work for me was her confrontation with Jessie.  The scene was played too much for laughs when it actually should have been a very tense scene.  Anna Gunn went back to her mannerism from the pilot that bothered me for seeming a bit sitcomish. 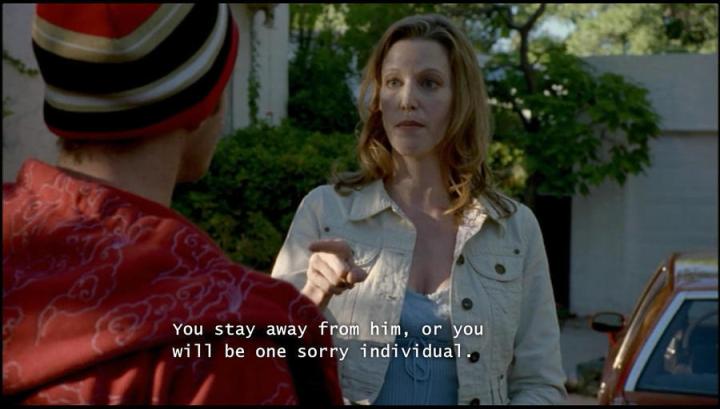 The live studio audience went bananas after this line.

Drama and tension wise, this episode really kicked it up a notch from the pilot.  There aren’t any real action scenes but their situation just feels so oppressive (which is helped by the lighting in Jessie’s house).  I vividly remember watching Walt and Jessie discussing what to do with the bodies and having this feeling of “I’ve never seen so much importance put into such a minor plot point.”  It was such an awesome feeling and the moment Walt says that they need to do something about the dead body before it starts decomposing, I realized this show was different.  It was great dramatically that the episode took the time to show Walt conflicted about what he needs to do with Crazy 8 and having him chicken out rather than have the situation resolved by the end of the episode.  And what an awesome ending.  The scene with Emilio’s melted remains and the bathtub coming through the ceiling were brilliant in how it was built up to and also in how it shows that nothing will be easy for these guys.  The final scene of the girl finding the gas mask solidifies that point. 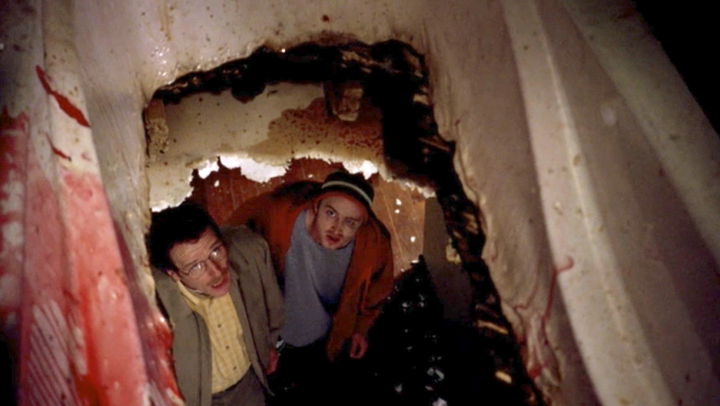 I’ve had arguments with friends about this show.  They’ve said that the show is too slow and is just a bunch of characters sitting around, moping and staring.  But to me, these slow scenes are what makes the big moments so dramatic.  For the fast-paced meth cooking scenes and action sequences to have any weight to them, we need these slow, character episodes.  Great episode.