I sometimes think I’m a huge softie when it comes to the Spurs and the NBA in general. I am the first to look for extenuating circumstances when a player is criticized. Usually I can find some examples that history has forgotten that, in my mind, exonerates them. Nothing is binary when it comes to the NBA.

Well nothing other than my feelings on LaMarcus Aldridge.

He might be a great guy in person, might be the nicest dude, but when my brother asked me in the summer of 2015 whether I wanted Aldridge, my response was more or less “hell no.”

My impressions of him was he was a guy who could take over games offensively when the stakes were low but didn’t have much of a counter to a tough defense. I saw a guy who was too reliant on low percentage jumpshots and didn’t seem to have much nuance to his game. Most importantly I felt like he was a guy prone to becoming disengaged.

Then the Spurs signed him. And he’s done nothing but piss me off, which sucks because I LOATHE hating on a Spurs player. But he has so many flaws that are egregious and contrary to what I think of when I think of the Spurs.
For a guy who is touted as one of the best low post players in the league, Aldridge’s array of moves is pretty limited. His go to moves are a tough turn around over his right shoulder or the one dribble step back one footer. He can hit both shots but his reliance on them makes him so predictable, especially during the 2017 playoffs. You can see the defense prepping for those shots as soon as he begins his move.

The problem with both of those shots is that there isn’t a natural way of turning those plays into crisp passes when the defense takes them away. Too many times I’ve watched him begin his post up, dribble a few times and I start praying he will drive middle (which he does far too rarely). Instead he will turn to his right shoulder but the defense is ready. For him to make any sort of pass at this point other than to the near corner or to a cutter in his direct field of view, he has to repivot and suddenly the timing of entire offensive sequence is messed up. The great players have an assortment of moves which they can translate into a shot or a pass to keep the defense on their toes. Aldridge clumsily panics when his move is taken away. Doesn’t help that he’s a pretty uninspiring passer. 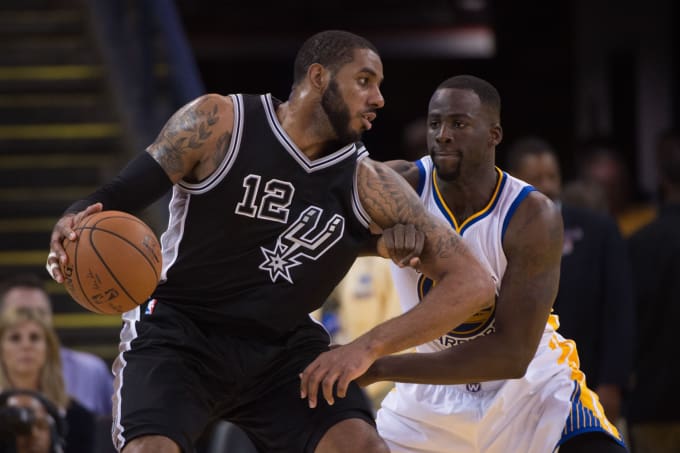 Draymond: “Sigh…what a repetitive assignment this is.”

Draymond: “You probably should change it up, brah”

Now I know Aldridge is a rhythm player and expected to be, if not option 1 on the Spurs, at least option 1b. No one could have seen Kawhi suddenly becoming the second or third best player in the league. I get that there would be struggles as he had to feel his way around the pecking order. But part of being a superstar (at least from a Spurs fan’s point of view) is learning to coexist with the players who are better than you. Parker and Ginobili we’re brilliant at this and Tim Duncan smoothly transitioned into this at the tail end of his career. But Aldridge doesn’t seem to know what to do in this situation. He either floats around unengaged or he looks for his own shot in the most clunky manner possible.

These issues are not helped by his performance in crunch-time. I was hoping that my crunch-time opinion of him prior to joining the Spurs was wrong but alas, nothing is ever how you would like. In 2016, he played really well in Games 1 and 2 against OKC but it never felt sustainable. He steadily got less effective until in Game 5, with the pressure mounting, he was tight on all his shots. 6/21 in the most critical game of their season. But me being me, I mentally gave him a pass. I thought that he had never been on a team with such high standards and figured he would be ready in ’17. Wow I was completely off. More on his 2017 playoff run below but lets just say it was a bounty of blown layups, bad post-ups, missed jumpshots and terrible body language.

“I may be the softest big man ever but WHY ARE YOU SHORT-ARMING ALL THOSE LAYUPS?!”

And this segues into my biggest issue with him. His attitude. He comes off as entitled while simultaneously appearing to want things to be easy. I mean, he made some idiotic comments after the All-Star game about how the Spurs should have had two all-stars because the Warriors had four. Did he even watch the Warriors??? Did he really think that he should have gotten a spot just because he is LaMarcus Aldridge? Then he showed how much he wanted it by…playing passive and timid during the playoffs. That name means jack-shit now after that playoff performance.

Then he had the gall to complain to the media that the Spurs were holding him back and passive aggressively unfollow the Spurs on Instagram. Grow up and look at yourself in the mirror. YOU SUCKED IN THE PLAYOFFS. You went 3/9 from the field, 0/2 at the line and had 2 turnovers in the 4th quarter and overtime against Houston in Game 5 after Kawhi went down. The ball was pounded down low to you while you were being guarded by Ryan Anderson or James Harden and the moment seemed to big for you. Danny Green and Manu Ginobili bailed you out. Then, when there were no expectations in Game 6 with Kawhi out, the pressure was gone. And suddenly you were playing well. Stunningly you carried it over to Game 1 against Golden State…until Kawhi went down. How did you respond? 3/11 from the field with 5 turnovers. I get that Golden State is a brutal matchup but you freakin wilted when given the opportunity. Then you just chose to pack your bags for Games 2-4. I mean, why would Pop trust you to be the centerpiece of the offense?

“Nobody ever told me that when I came here, I might be guarded by two people.”

I honestly think he’s that guy who would be content on a team with low expectations where there is no pressure. I don’t see him as a guy who is going to go all-out developing his passing game to make teammates better or developing counters for a playoff-level defense. I see a guy who is good against regular season defenses but doesn’t want the responsibility of having to dissect a playoff defense scheming to stop him. To me it isn’t his numbers but his lack of competitive fire. And Pop sensed it too which is why he barely played in Game 4 against GS. I can’t help but think that there are too many expectations in SA for him. I think he has more in common with Kevin Durant who short-cutted his way to a title than with Manu Ginobili who puts everything on the line to win every game.

There’s nothing wrong with wanting your job to be much easier and not wanting to deal with too much pressure in your daily work. It happens to everyone and if this is how LaMarcus feels, I can’t really blame him. But as a Spurs fan, I can’t deal with his failure to show up in big games, his robotic and predictable game, and his childish behavior when the situation isn’t working out for him. Congrats LaMarcus…I’ve never wanted a Spurs player gone more than you.