Despite the joke in my title, that final scene with Walt blowing up the car was my least favorite part of this episode.  After the very focused tension of the last two episodes, the show did need to step back and identify what the path forward was going to be.  Cancer Man did that job fairly well.  The emotion throughout was very well done and there were some very powerful moments.   However, there were also a few issues which felt like Breaking Bad finding it’s confidence.

The main thing this episode did well was hit the mark with the emotional scenes, in particular with respect to Walt.  His story about how he and Skyler met is fantastically written and acted with Skyler silently breaking down as he talks.  The story is great but its both Walt and Skyler’s reactions that make the scene as good as it is.  Walt is clearly thinking about a memory that he treasures and is proud of.  This is probably the first time in the show so far that he is actually beaming about something from his past.  Skyler is clearly thinking about her husbands mortality and it is a heartbreaking scene. After three episodes where they were mostly arguing or giving/receiving half-hearted handjobs, this was brilliant at showing how much they love eachother.

Hank, Marie and Junior all have their moments to shine once they learn about Walt’s cancer.  Marie is proactive and supportive and adds some layers to her entitled, gossipy, kleptomaniac character.  Hank does what a lot of guys in his situation would do and tries to assuage Walt’s fear by saying he will take care of his family.  Bryan Cranston’s reaction is priceless and provides so much more insight into Walt’s sense of pride.

But really the scene that completely destroyed me is where Walt and Skyler discuss the logistics of paying for the best treatment.  Walt is trying to be logical here and doesn’t want to put such a burden on his family and Skyler is just thinking in steps to keep her husband alive.  Walt Jr.’s yells out “well why don’t you just fucking die already?  Just give up and die.”. It’s such a raw moment and it’s played amazingly by all three actors.  (I have my issues with some of RJ Mitte’s acting in this episode but he nailed it here).  It’s such a realistic moment…too often in TV, the characters deal with crises in very cliche ways.  Here though, this feels like exactly what a real teenager would feel about his father avoiding treatment.  Walt’s face after that line is heartbreaking and Skyler’s sharp gasp sells that scene even more.

Walt’s storyline is basically how he and his family deal with the cancer diagnosis.  Jessie’s story revolves around him going back home to his parents after his ordeal.  There are some nice moments here,  with Jessie manipulating his parents to let him stay a bit or with Jessie covering for his prodigy brothers pot habit.  Best of all is when Jessie takes his stroll down memory lane looking at his test/picture from his days in Mr. White’s class.

However, this side plot feels more tacked on and like a “greatest hits collection” rather than anything with much depth.  Maybe it’s because this story starts halfway through the episode and in that span, we see him come home, emotionally manipulate his parents, bristle at his mother’s attitude towards him, reminisce about his past, and take the fall for his brother.  I appreciate the development to Jessie’s character but I can’t help but feel like this side plot could have been stretched out.  So much happened here that to get it all in 25 minutes meant that a lot of it felt rushed and hackneyed.  It’s all stuff I’ve seen or read elsewhere.  I mean, we have two siblings here who each think the parents love the other more.  THIS IS GROUNDBREAKING.

Jessie is perplexed as to why his brother looks like a plot device.

Part of this problem I think can be attributed to Breaking Bad still being in its infancy.  The show was already different from its contemporaries; I think that’s clear from the first three episodes.  However, I don’t think Vince Gilligan and co. were fully confident at this point in what they were doing.  So here, in this cool-down episode, they did the job of developing Jessie but felt that they needed him to return to status quo by episode end to set up future adventures.

This feeling for me is exasperated by Walt’s two encounters with the douchebag, Ken.  I think the producers were not confident enough to have an episode without a badass Walt moment.  However, by the nature of this episode’s storyline and Breaking Bad’s careful plotting, there wasn’t a natural way of having this moment.  So Ken was born.  He was born and raised to be a complete plot-device, who’s sole purpose was to have Walt blow up his car at the end.  It’s jarring and took me out of the story more than anything else up to this point, and it does not feel like something Walt would do.  There’s cooking meth where he’s carefully protecting himself from being caught.  Then there’s blowing up some dick’s car because we need to think “damn, Walt being Walt.”  That sucked. 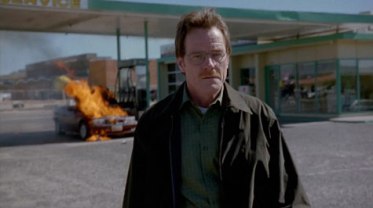 Luckily, the rest of the episode exuded the normal Breaking Bad confidence.  It was a slower episode, but it effectively laid the groundwork for what is to come.  Hank and the DEA are on the trail of the new Albuquerque kingpin, Walt’s family is pushing him towards a treatment that he can’t afford, and Jessie is an outcast from his family and appears to want Walt’s approval.   Most importantly, the emotional backbone in this episode was very powerful and does a good job of keeping me invested (even now, in my fifth rewatch).