Breaking Bad is generally excellent at setting up its various big moments and tapping the full potential of these moments.  Even in the first season, we had an entire two-episode arc about how Walt and Jessie would deal with the ramifications of their first cook together.  It may have seemed slow to some but I enjoy the buildup.  I like things slow and steady and don’t need a constant string of set-pieces.  This episode, however, eschews the slow pace for some faster paced “moments” and it ends up feeling like “Breaking Bad Lite”.   There are still strong elements to this episode. Walt and Jessie’s interactions with one another and with Tuco are great and Skyler and Marie have a solid, lighter, side-plot. In other ways, this episode is frustrating for me seeing as it is full of shortcuts and missed opportunities.  I just don’t think this episode handled it’s drama very gracefully.

Kind of how Tuco likes to handle things.

Watching it again, I can kind of see what the episode was going for.  Walt has been on a roller-coaster ride for the entire first season.  He’s snapped back and forth between thinking he has things under control to everything spiraling out of his hands because he actually doesn’t know shit about the meth business.  Where we last saw him, he was realizing just how much he likes this dangerous business, what with his guttural roar after blowing up Tuco’s office.  So now he’s feeling untouchable. For the first forty minutes or so, everything goes Walt’s way.  Things are easy, things fall in place, and his life couldn’t seem any easier.  He cockily fingers Skylar under the table during a school assembly meeting.  He turns on the ol Mr. White charm as he manipulates Jessie to stay in town and help him.   He orchestrates an ad-hoc heist for some methylamine as casually as if he was planning a grocery store trip.  He repeatedly ups the ante with Tuco without really thinking things through.  Yeah, he’s pretty arrogant in this episode.

Why Walt doesn’t let out another guttural roar after this is beyond me.

I think its very good characterization to have Walt be more brazen here after his recent successes and some of the scenes really work naturally.  His scene with Skyler at the school is great as are his interactions with Jessie.  Bryan Cranston and Aaron Paul have such great chemistry in these scenes and the humor is always there.   I love the back and forth with Walt trying to convince Jessie into staying and helping and Jessie being utterly perplexed as to why Walt is being so nice. Plus, the exchange on the cons of doing a drug meet with a psychopath at a deserted junkyard is priceless.

Speaking of said psychopath, their first meet with Tuco is strong.  Walt’s negotiations with Tuco seem less like a reasonable tactic that was logically thought out and more like the residual energy he has from last episode pushing him towards recklessness.  He’s still on a high and it comes through in his demands. Jessie for his part is utterly petrified with having to see Tuco again and it’s amplified when Walt promises the world to Tuco.

But where this episode falters is it just blows through some scenes that would have worked better with an actual sense of danger.  First, after Walt makes his unreasonable promises to Tuco, Jessie fills him in on where the bottle-neck is in his plan.  In order to obtain the primary ingredient needed to yield four pounds of meth a week, they need to steal it from a secure warehouse.  Walt brazenly jumps at the chance to use thermite to blow through the steel doors and steal it himself.

Really???  This guy has two meth cooks under his belt.  Yeah he blew up Tuco’s den, but that was in defense of his partner.  I just don’t buy the casual confidence Walt has about this plan.  I get that some people will say that he’s cocky from his plan with Tuco working beautifully but this doesn’t jive for me.  If the plot went in the direction of Walt and Jessie having to steal from some low-level street guys, I would have bought it.  But the methylamine heist just feels forced and too easy. Thankfully, the comedy and chemistry between Walt and Jessie keep the scene pretty enjoyable, in spite of itself.

Its not as bad as the open-house sequence though.  Whereas the heist scene is plot-essential, this sequence here feels like padding.  It’s all forced drama here.  The RV doesn’t work properly so they have to cook in Jessie’s basement.  Ok, fine.  I’ll ignore the fact that they are able to set up so quickly and this feels really glossed over.  Then Jessie calls his realtor to make sure she doesn’t show up today (he put his house up for sale some time since the third episode).  He doesn’t seem worried or anything that it just went to voicemail.  Okkkk, Jessie might be an imbecile at times but I don’t buy that he wouldn’t be more alarmed or mentioned this to Walt.  But whatever, maybe the tension in this scene is going to be great!  Nope, we get some hilarious scenes like Walt shushing a little girl while wearing a gas mask.  Does she mention this to anyone?  No!  Because that would ruin the hilarity!  Then we get the realtor spraying air-freshener when the place starts smelling funky.  COMEDIC GOLD, I tell ya!  Finally, Jessie just kicks everyone out when they try to come down to the basement and crisis is averted.  This scene was utterly underwhelming and felt tacked on with some very un-funny humor.

The scene where Walt tries to play this off as cash up front to buy the house was cut for time.

My problems with those scenes aside,  this episode was about Walt naively thinking things will be easy and those scenes do achieve that.  The episode is light-hearted and breezy for 95% of its running time and then everything snaps back to reality when Tuco brutally beats the crap out of his minion in front of Walt and Jessie.   I like that the show decided to shove it in Walt’s face about how naive he is about this whole enterprise and both Bryan Cranston and Aaron Paul are great in that moment.  Clearly they (and we the viewers) realize that things are about to become ridiculously difficult.

Elsewhere, Skyler and Marie have a solid sub-plot where Marie’s kleptomania pops back into focus when she “buys” a tiara for baby Holly and Skyler goes to return it.  We get some amusing scenes of Skyler getting out of a jam and some good development to the sisters’ relationship.

Hank isn’t given much to do other than have a very on-the-nose conversation with Walt about the legality of meth.  I swear, I feel like Hank is given the worst dialogue in the first season.  Everything he says is either meant to exaggerate Walt’s lack of masculinity or very artificially instill drama into scenes about what Walt is doing right under Hank’s nose. 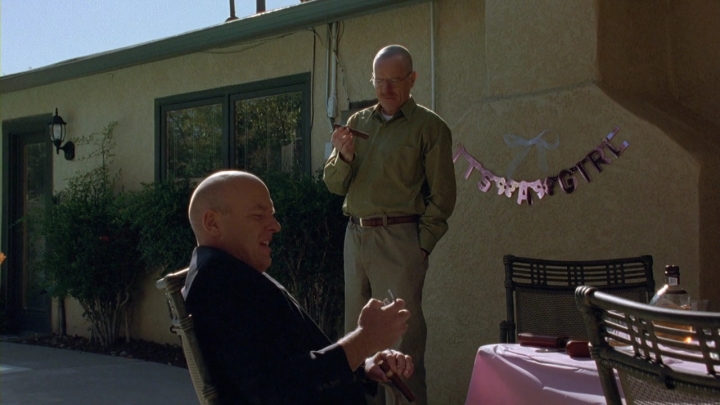 “Here’s to me getting one line of good dialogue next season.”

But in the end, this episode, flawed as it was, did its job.  It got Walt and Jessie into a position where things seem like its under their control but really, they control nothing.  Tuco continues to be a fearsome presence.  Every time he’s on screen, it feels like something bad is about to go down (and also, three out of his four scenes so far have ended with either someone beaten to a pulp or an explosion).  The episode was engaging like it always is–I just prefer my Breaking Bad a little more graceful with its approach.