The first season of Breaking Bad was great, but felt at times a bit rushed and lacking in finesse.  Some episodes seemed too eager to have defining moments which ended up seeming tacked on while others struggled at time with the tone.  Really enjoyable season, much better than anything I would ever write (except for these reviews), but had some rookie mistakes.  Well,  yegads man, Seven-Thirty-Seven gets Season 2 off to a great start.  Its a fine example of how tense television can be.

Really, that is the big change between this episode and the prior seven.  Those first season episodes had their tense moments, but they were just that–moments.  This episode has a constant aura of intensity to nearly everything that occurs.  Its an episode where it feels like things might explode in any of a hundred different directions, all of them terrible for our lovable heroes.

Maybe even a love triangle.

Walt and Jessie ended last season realizing that they were completely in over their heads.  This episode picks up directly where A No-Rough-Stuff-Type Deal left off, and has them having to deal with the Tuco who, as it turns out, accidentally killed his minion.  Whereas the junkyard scene at the end of Season 1 was brutal and somewhat shocking for the characters, it didn’t feel like there was an immediate threat to Walt or Jessie.  Here?  Yeah, its quietly terrifying.  You can feel how unreasonable he is when Tuco demands that Walt save No-Doze by “doing that thing”.  Things get more and more unsettling when he just resorts to quietly smoking and staring at Walt and Jessie (and the moment when he shoves Jessie feels so real too because you just know a bully like Tuco would pick on the guy who is clearly terrified of him).   Great acting all around and Breaking Bad is the master of these scenes with very little dialogue, no music, and loads of tension.

The tension doesn’t stop there.  Walt and Jessie argue about what Tuco meant by saying “you’re done” and there is a certain frantic edge to everything they talk about here.  Jessie initially wants to just blow Tuco away at their next meet but Walt understandably shoots his idea down (once again, love the juxtaposition between the two characters).  But once Walt spots a suspicious SUV idling in his neighborhood, he takes action and comes up with the ricin plan.

That SUV scene infects nearly every other scene in the episode with dread.  Because we saw someone staking out the White house, suddenly characters like Skyler seem at risk.  That allows for some good ol audience manipulation.  I’m talking about the moment when Skyler is sitting at home and a shadow walks past the window.  Or the fantastic mislead of Hank sounding like he’s about to give Walt terrible news about his family while police lights are flashing in the background when he’s really just giving him terrible news on how pissed off Skyler is.  I’m usually not a fan of blatant manipulation like that but I think it works here.

Most terrifying of all is why is Hank grinning creepily at the back of Marie’s head?

And wow, the ending is great.  At this point in the show, I was uncertain where the writers were taking us so I thought all bets were off.  From the moment that Hank sends Walt the picture of Gonzo dead till the final frame of Walt and Jessie driving off with Tuco, the show had me on the edge of my seat.  Walt and Jessie’s panic feels so raw and real because it does feel like Tuco is closing in. And of course, the final moments set us up for a crazy next episode.

Walt is fantastic as usual and I love how the sequence at the junkyard really rattled him.  Normally, he’s able to hide his feelings decently from Skyler but in the scene where he comes back home, decked out as Heisenberg, he seems to be at the end of his willpower.  After the brutality and utter pointlessness of Tuco’s behavior, Walt looks for comfort with his wife and its a dark and tough scene to watch when he basically forces himself on Skyler.  Likewise, at the end of the episode, things have gotten so bad that he seems to be about to spill the dirt on everything to her until he’s interrupted by Tuco.  This is the first episode where Walt seems like he’s suffocating in the new life he started for himself.

The episode also did a good job of re-emphasizing some of  Jessie’s characterization.  He’s not a hardened criminal.  He’s almost shell shocked after Tuco beats up No-Doze and he can barely contain his fear during the scene right after when Tuco is silently menacing them.  His fear leads to him buying the gun which gives us the great scene where Walt picks Jessie’s plan apart methodically.  Jessie is almost hysterical with fear all episode and I really think it helps sell how serious the situation is that they are in.  And really, this is the first episode where he became the most sympathetic character to me. 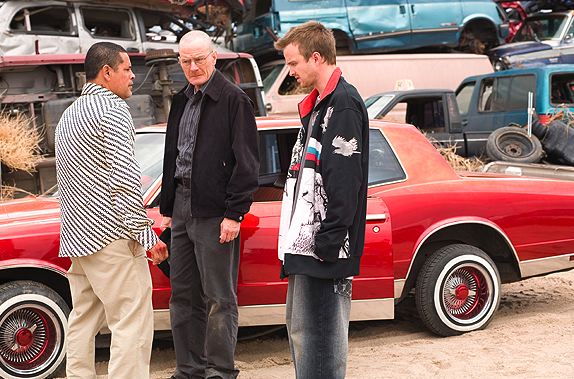 Even Tuco wants to hug Jessie.

Elsewhere, the side characters are getting more substantial material.  Marie’s kleptomania opens things up to see more of her personality which includes brazenly ignoring the fact that her sister is pissed at her, dismissing her supportive husband, and running over neighbor’s toys.  Its some much needed levity to such a tense episode.

Hank is much improved from his previous appearances.  He doesn’t seem quite as clownish, we see him being an actual competent husband, and he has some really solid character scenes with Marie and Skyler.  This was a good step because first-season Hank was either too obnoxious or just boring because of how one-note he was.

Skyler’s scenes are mixed.  The almost-rape scene is horrifying and Anna Gunn plays the hell out of that scene.  Her life is slowly falling apart because Walt is being so secretive and she has no idea why.  That and learning your sister is a petty criminal would be super stressful.

However, her big blow-up at Hank feels off.  Hank is good in this scene, but Anna Gunn goes back to her early Season 1 MO of slow facial tics to try to play up the comedy.  It just DOESN’T WORK for me…it feels too much like its being played for laughs.  Then her speech sounds like its supposed to be a “YOU GO GIRL!” moment but it feels so scripted.  Breaking Bad is at its best when the dialogue is natural and this scene didn’t feel natural.

The main takeaway from this episode is the show means business now.  Breaking Bad hadn’t been shy up to this point of having Walt and Jessie have to deal with repercussions and Seven-Thirty-Seven ups the ante.  The entire episode feels like a ticking time bomb and the intensity throughout was a big change from how previous episodes handled things.  This was a fantastic opening and I can’t wait to find out what happens next (for the sixth time since this is my fifth rewatch).