An Air Force pilot with really bad skin mysteriously disappears, most likely due to his colleagues’ unreasonable hygienic standards.  Sympathizing with those with skin conditions, Mulder close-talks Scully into submitting to his plan of heading to Idaho. 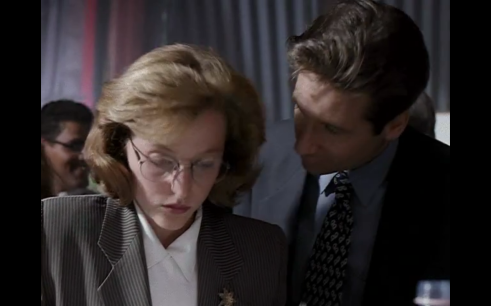 Mulder shows how to greet your colleague after a week of working with her.

Before leaving though, Mulder leads an elderly man named Deep Throat into a public bathroom.  Realizing Mulder wasn’t there for anything really related to his name, Deep Throat switches tactics and spouts conspiracy theories that entice Mulder.  He then vanishes by walking out the door, leaving Mulder flummoxed.

Upon arriving in Idaho, Mulder and Scully stop to stare everytime they hear a plane.  When they aren’t busy being distracted by the miracle of flight, they talk to the wife of the missing Colonel Budahas.  His wife helpfully uses the scientific term for “fish food flakes” rather than saying the colloquial term of “fish food flakes”, no doubt to show the Agents that Colonel Budahas was marrying up and had no reason to run away.

Having exhausted their regular leads, Mulder drags Scully to Ellen’s Air Force Base where he sits back in the hopes of seeing UFO’s.  Scully is all like “Mulder you are an idiot” when suddenly, a poorly executed light show begins in the sky.  Both Mulder and Scully are transfixed which is not surprising considering they spent their first day in town basically hyperventilating every time they heard an airplane.  Then a helicopter dedicated to chasing down over-stimulated FBI agents and Seth Green chases them.  Thankfully, they escape and manage to hide their enthusiasm at being chased by a vehicle that can fly. 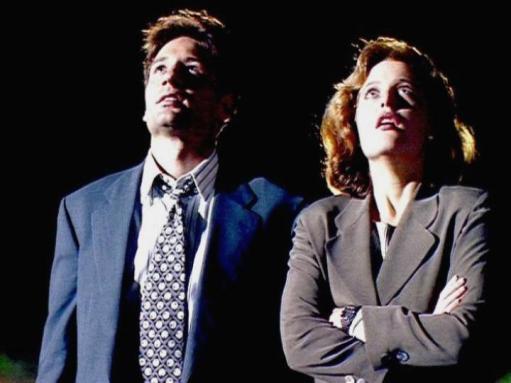 Mulder and Scully suddenly remember that they were here to find a man with a really bad rash.  But alas, he has found himself!  But his wife claims that this man is not her husband.  Mulder discerns that Budahas is basically himself except he doesn’t remember anything about how to fly planes, a real problem for an Air Force pilot and a real bummer for Mulder and Scully, noted airplane enthusiasts.  A much more major problem for our intrepid agents is to now find the incredible dermatologist who kidnapped Budahas because he was returned with nary a blemish on his face

Mulder and Scully argue over what could have happened to the pilot.  Mulder thinks the dermatologist wiped his brain while Scully argues that Mulder is an idiot.  They are interrupted when a bunch of guys who really don’t like the sun in their faces drive them off the road.  They steal their evidence and then punch Mulder in the kidneys to show that they mean business.  Scully watches this exchange with mild disinterest, most likely because there are no airplanes to captivate her. 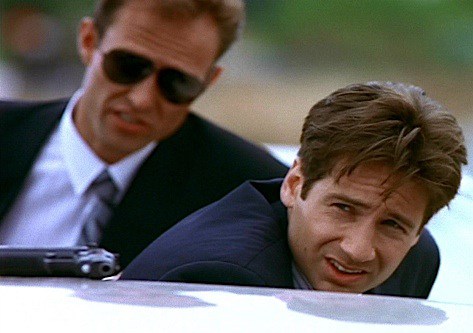 “Can you at least pretend that this interests you?”

At this point, Mulder is convinced that Budahas got his skin condition from flying planes with UFO technology.  Scully is tired of craning her neck skyward and wants to go home.  Mulder ditches one redhead for another and has Seth Green lead him to a secret entrance to the airbase.  Once there, he witnesses yet  another aircraft hovering over him.  This one is legitimately worth the attention but unfortunately some base personnel start chasing him.  Mulder chooses to run in a straight line rather into the weeds to his right.  This is good for acceleration purposes but is impractical when participating in a chase, as Mulder soon finds out.  He is summarily caught.  Dermatologists begin treating him immediately despite his heartfelt assertions that his skin is, in fact, blemish-free.

Meanwhile, Scully has her lazy day off interrupted when an incompetent spy posing as a reporter attempts to capture her by walking into her hotel room whilst leaving his gun in his car with the car door unlocked.   Alas, he is the one who is captured.  Scully, for reasons only known to herself, still values Agent Mulder as a human being and has the spy set up an exchange…himself for Mulder.  At the exchange, Mulder emerges from a jeep.  It appears that his encounter with the dermatologist has left him lacking in self-confidence but other than that, he is fine.   Mulder nervously ambles across the road to Scully who ushers him away.  Mulder, uncomfortable in his own skin at this point, doesn’t remember anything that just happened. 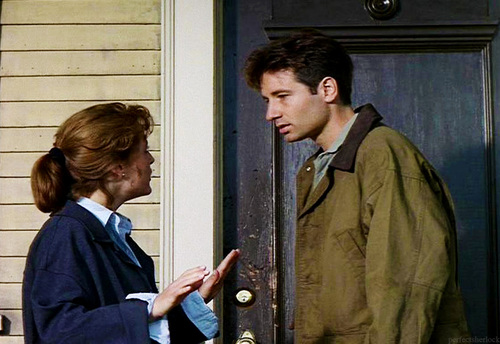 “You just need to believe in yourself, Mulder!”

Days later, Mulder is trying to build himself back up from the ground up by running in circles in an attempt at self-therapy after the embarrassment of running straight during the chase at the airbase.  No doubt, the personnel there laughed at Mulder, leaving him short on self-confidence.  Deep Throat approaches Mulder and hits on him by spouting off cryptic messages about aliens and conspiracies.  This is just the medicine Mulder needed as he now has his self-worth restored and an ally in an old man who follows other men into bathrooms to stare at them while they wash their hands.

Well I’d consider this a big improvement over the Pilot.  The main plot line is handled much more deftly and our heroes are in actual danger, upping the stakes.  Some of it is  really cheesy like the terrible special effects when Mulder and Scully are watching the lights  in the sky or the terrible “Men in Black” scene.  But more often than not this episode hits some solid marks.

For one thing, the acting is much stronger in this episode.  Gillian Anderson basically has got her character down at this point which is pretty impressive when you think about it.  She’s convincing as a skeptic but never comes off in this episode as being intolerant to Mulder’s wacky shenanigans.  David Duchovny tones himself down from the Pilot to much greater effect here.  He’s still a bit wooden but he has a quiet intensity in several scenes that really work well.  More importantly though, both GA and DD have their chemistry pretty much down pat (other than that first awkward exchange this episode) and they play off each other very well.

The overall plot is strong with Chris Carter showing some of his chops as he concocts a story completely different from the Pilot while still dealing with aliens.  I like that the episode never actually spells out whether Mulder or Scully (or neither) is right here.   Plus we get some decent “actiony” set pieces here.

But really, this episode is memorable for the introduction of Deep Throat.  He’s such a great character and I love every one of his interactions with Mulder.  Just the idea of a shadowy informant makes everything more interesting and Jerry Hardin plays him with a kindly, fatherly demeanor that makes him so endearing.  And with Deep Throat comes a fairly catchy leitmotif (it’s the one that plays when Mulder is running at the track and when he’s walking through the weeds at the base).

So all in all, a strong second episode.  If I was watching from the beginning, I don’t think the Pilot would have grabbed me but most likely, this episode would have done the job.