Recap
An elderly, flexible, and athletic man becomes frustrated due to his liver deficiency and decides to embark on a murderous and amoral crusade against those with healthy livers, whilst showing off his athleticism by traversing through building air-ducts. 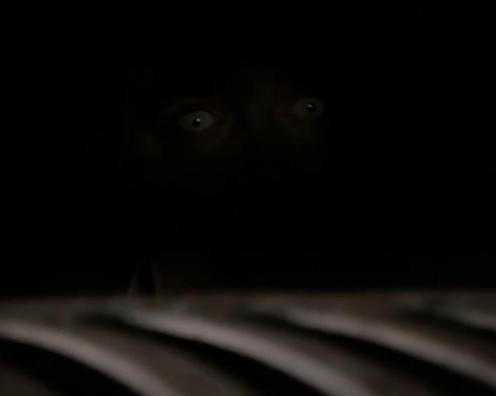 When Scully hears about this from her ambitious former friend (AFF), she informs her preposterous current friend, Mulder, about the happenings.  AFF mocks Mulder about his belief system, clearly violating the FBI’s ethics training.  This doesn’t stop Mulder from finding a distorted fingerprint on the air vent, which Mulder immediately deems a trait of a mutant.  Not realizing how overwhelmingly stupid he sounds to his rational partner, he then casually mentions that he also believes this mutant was responsible for hate crimes of individuals with livers thirty and sixty years ago.  Scully, having heard enough about the paranormal in the past few weeks, rejects these notions as the ravings of a madman.

Instead, having been peer pressured by AFF, she abandons Mulder and puts together an incredibly rudimentary and bush-league psych profile that  incites a preposterous level of group-think.  Scully says “the killer most likely  is as average as can be and might go back to a previous kill site.” The Senior FBI agents are floored by this insight and decide to stake out five locations with multiple FBI agents because the FBI’s budget is such that they are willing to pay overtime to about 20 FBI agents to sit around based on the flimsy lead of a consultant who doesn’t actually work homicide or have a psych degree.

Poor budgeting aside, Mulder is not involved in said stakeout but feels the need to randomly throw on some jeans, grab a bag of sunflower seeds, and start running laps around the garage Scully is monitoring.  No doubt he wants to be in tip top shape should he run into the athletic killer.   As his workout regime intensifies, he happens on an animal control worker skulking around in the air-ducts.  Despite appearing to have no athleticism, he is brought in for questioning.

During questioning, this individual, Eugene Victor Tooms, displays almost all of the telltale signs of being a sociopathic murderer but Mulder undermines the investigation by asking him about his age.  The age question throws the polygraph results all out of whack, because you just never ask an old mutant his age, DAMMIT!  AFF is miffed by Mulder but Scully is charmed when Mulder creepily fumbles at her chest for her giant plot device, better known as a necklace.  Mulder then reels Scully in with some amazing photo-shop which shows that Tooms may in fact be more athletic than they ever anticipated. 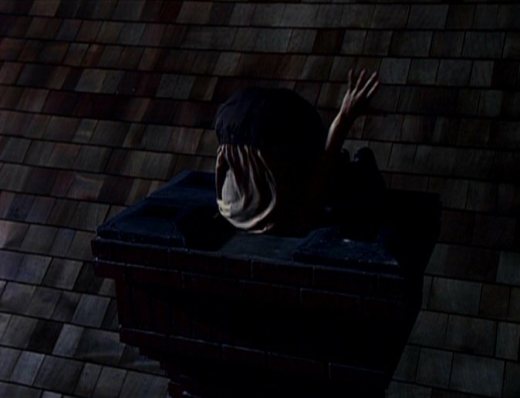 Five minutes of Tooms stuck like this were cut for pacing.

When Tooms claims another victim through athleticism and then takes a trophy to celebrate his athletic endeavors, Mulder and Scully conduct some very exciting historical research which leads them to story time with a depressed former police officer.  Said police officer investigated Tooms 30 years ago but was removed from the case when he began to make tasteless remarks comparing five murders to the Holocaust.  Despite being a drama queen, he gives Mulder and Scully the evidence they need to find Tooms.

Our intrepid agents arrive at Toom’s lair and search meticulously.  They spot what looks like a nest covered in some unknown liquid.  Mulder decides to touch the liquid before examining, smelling, analyzing, discussing, or thinking about the situation, just so that he can make a joke to try to amuse Scully.  Realizing that Scully thinks him a disgusting human being, Mulder launches into a rambling diatribe about how Tooms, due to his rampant athleticism, requires regular servings of liver and more sleep than regular people. 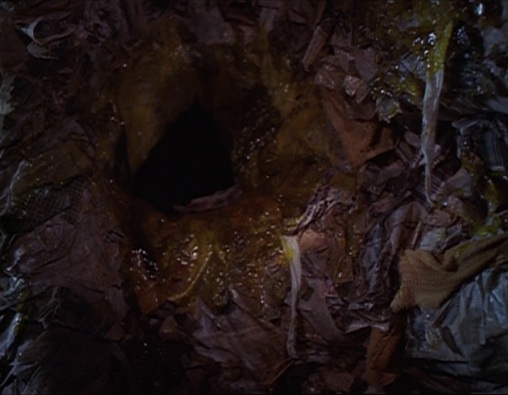 Yeah, there is no reason to hesitate sticking your hand in here.

Unbeknownst to them, Tooms is watching them from the ceiling and inexplicably takes the plot device necklace from Scully as a preemptive trophy.  Clearly his heightened athleticism has led to increased arrogance because this is the first trophy he claims prior to a kill and he chooses the competent, cautious, rational FBI agent, rather than the idiot FBI agent who would stick his head into a nest even if there were bear traps, poisonous snakes, and Xenomorphs within.  Then again, maybe he chose wisely seeing as when Scully realizes she’s snagged on something and then gets free, she doesn’t bother to question why her necklace is no longer there. 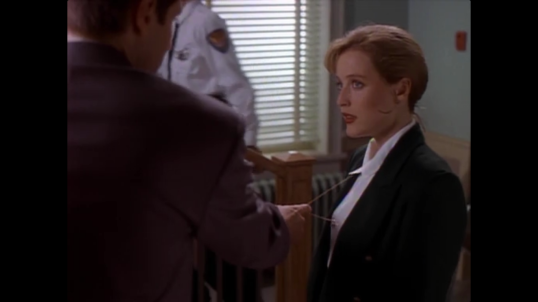 Or maybe she just thought it was Mulder being creepy again

The dynamic duo set up a stake-out at Tooms’ building.  AFF however, will have none of that.  He has become very budget conscious ever since the ridiculously extravagant stake-out they conducted earlier which, in his mind, yielded no leads.  He shuts down the stake-out leaving Scully in a blind fury.  So furious in fact that she makes a really half-hearted effort to contact Mulder and let him know that the case they have been working diligently on has fallen through.  Girl needed her bath!  She ain’t got no time for no debrief!

Mulder sniffs out what is happening when he notices no one at the stake-out by blindly running into Toom’s lair in the middle of the night.  Obviously, he feels he is invincible after he stuck his hand in some unknown liquid and didn’t sustain any sort of acid damage.  Within, he finds Scully’s plot device.  Enraged that Tooms’ efforts at grabbing her necklace were less clumsy than his own, he rushes off to Scully’s apartment.

Scully is prepping for a soak when Tooms, snaking his way through her ductwork, drips some body wash on her arm.  Irate that an intruder stole her body-wash, Scully brandishes her gun and prepares to kill the monster.  Tooms attacks her with athleticism but none of the subtlety or stealth he utilized on earlier victims, and Scully is able to fight back.  Mulder arrives and the two work together to bring the athletic, aging mutant to justice.  Tooms is put in a psychiatric ward where the personnel have a high tolerance of their patients building bile nests in their cells. 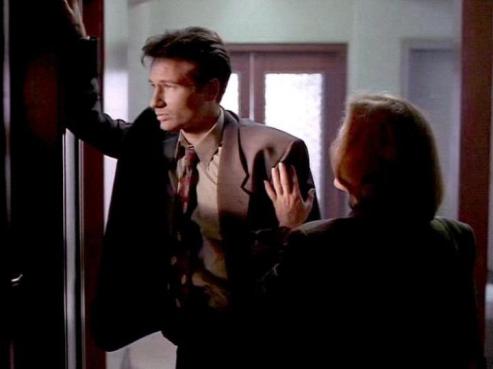 “I know how much you want to stick your hand in that nest but enough is enough!”

This is the first, non-alien episode of the X-Files and it is a pretty creepy start.  It only hit me on this viewing (probably the fifteenth or so time I’ve seen this episode) but Glen Morgan and James Wong went all out with the paranormal aspect in this episode.  Rather than just pick one single trait, they make Tooms a monster  who can contort and squeeze his body into almost anything,  eats human livers, is extremely old, and only kills in between his hibernation cycles of thirty or so years.  Somehow it all works.

Part of it is that this episode is a great change-up from the first two.  The Pilot was mildly creepy but Deep Throat was more of a paranoia-fueled episode, than anything scary.  This episode is much darker, moodier, and creepier than either of the first two.  Tooms is quietly terrifying and well played and there are a couple of scenes that would be well-suited for a horror  movie.  (I really wish I could watch this show fresh because now I know exactly what is going to happen so its hard for me to be creeped out).

We have some strong character development from Mulder and Scully here too.  Scully clearly maintains some ambition beyond life on the X-Files and jumps at the chance of working a normal case.  However, push come to shove, she does not blindly discount the paranormal, and is willing to side with Mulder rather than selfishly ingratiate herself with her friend and superiors.  Mulder, meanwhile, comes off as completely grateful that Scully, through three cases, does not just think of him as a nutcase.  He appreciates that she is open to his theories, even if she doesn’t agree with them.  This episode does a great job of really showing why these two different characters would get along so well.

There are some classic elements sprinkled throughout.  I’ve already mentioned Tooms and he sets a great precedent for all future Monsters-of-the-Week .  The scene in Exeter Street is a fantastic, moody, and long scene just dripping with atmosphere.  We get Mulder sticking his hands into whatever he sees without thinking and we get a great moment of him laying out his theory to Scully.  Again, like Tooms himself, this theory seems to set the template for all future theories.

The episode does have its flaws though.  The pacing could have been improved (the scenes of Mulder and Scully going through years of newspapers is awful and could have been handled better) and there are some odd logic moments. Why is Mulder running around the stakeout, dressed like its casual Friday?  Why does Tooms take a trophy from Scully before killing her, other than to heighten the tension?

But all in all, this is a very strong first MOTW and a very tense, creepy episode.