The two mythology episodes in Season 10 were utter garbage.  I was so excited to see them take the show in a new direction while keeping the atmosphere, pacing, characterizations and drama that I loved from my youth.  But they completely failed in every aspect over those two episodes.  No atmosphere (it felt like I was watching NCIS), godawful pacing, characterizations that made no sense, no emotional resonance to anything whatsoever.

My Struggle III does the exact same thing but with a little more direction.  Inept…but not rudderless ineptitude.

My Struggle II was hell-bent on ruining my favorite show forever.  The only things I enjoyed in Season 10 were the MOTW episodes and the ending to that episode made it seem impossible that we could go back to normal MOTW episodes.

So while I was initially confused by the start of this episode and then deeply annoyed that he simply decided to just “walk it back”, eventually I found myself ecstatic that Chris Carter decided to basically call My Struggle II a Scully fever dream.   I absolutely loathed the idea of the show being about the Apocalypse when Carter’s handling of the lead-up to said Apocalypse was completely asinine.  So this retcon is a terrible twist….but necessary in my mind.  This would allow the focus to be more on the characters (even if it’s written poorly) and make it so we can still do the Monster of the Week (MOTW) episodes.

With the amount of development these two got, its likely they too were figments of Scully’s imagination.

Sadly that doesn’t make this episode good.  It just makes the direction of the show more palatable.  But let’s look at what was good (be prepared though that most of the good is mixed with bad…its so tough to filter out this episode).

I like the idea of giving the Cigarette Smoking Man more of the spotlight  I always loved him as an antagonist so I don’t mind bringing him to the forefront.  His line deliveries brought me back to my angsty teenage years watching the original run so that was good.  It’s just unfortunate that I could barely comprehend his big speech to Reyes because the editing was so schizophrenic.  Also, while the line deliveries were good, I’m fairly sure that the actual lines were nonsense.

Another character who got more screen-time was Skinner, who is probably my favorite character.  Skinner was brought back in the revival and it was clear no one knew what to do with him.  In this episode, he is given good (ok not good…more like somewhat interesting) scenes separate from Mulder and Scully and it’s always a pleasure to watch.  Sure these scenes have been done before but it’s nice to see Skinner and CSM butting heads again (though I kept expecting Skinner to laugh at Reyes for being the most incompetent heel-turning rat ever).

Bringing Spender back was good as was taking a walk down memory lane with some good flashbacks.  William becoming the focus rather than the stupid Spartan Virus is a step in the right direction.  Bringing in a Consortium of sorts (even though it’s  not the Consortium that we know and love) is a decent change.  All in all, I appreciated the focus of this episode even though the execution was laughable.

So what didn’t work?  Let’s start with the atmosphere.  The X-Files was always an atmospheric masterpiece, even in the LA years.  It was dripping with ambiance and the music greatly enhanced everything.  Honestly, when I watch the old episodes, it still feels contemporary because the cinematography and music was so ahead of it’s time.

In this episode, we trade all that for sterilized action scenes like a bad episode of 24.

Seriously how many car chases did our agents actively participate in back in the day?  For whatever reason, Chris Carter continues to make Mulder into Jason Bourne.  And just like that awful fight scene in My Struggle II felt out of character, so too did this car chase.  Not to mention this was one of the worst car chases known to man.  You don’t generate tension with repetitive shots of cars, speedometers or furrowed brows.

Or maybe you do.

Pseudo-Bourne car chases aside, when did Mulder become so willing to kill people??Remember when Donnie Pfaster was straddling Scully and Mulder burst in and yelled “hands in the air” like proper law enforcement?  Here he grabs a scalpel and slashes a guy’s throat and doesn’t bat an eye.  Glad to see he’s been watching 24. 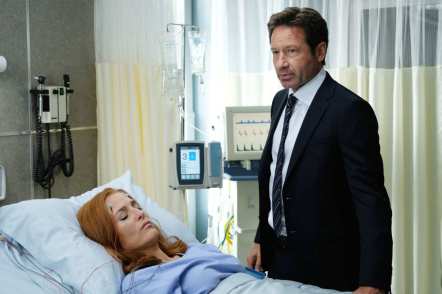 These action sequences are a symptom of a larger problem.  This episode (and both mythology episodes from last season) refused to take a breath.  The X-Files became my favorite show because of the drawn out tension and interactions.  This episode is spliced together like everyone is sharing in Scully’s seizure.  Seriously, I can’t tell if CSM’s monologue to Monica was any good because the episode kept cutting to something else.  Likewise, the confrontation between Skinner and CSM (something that I don’t think we’ve seen since freakin’ Season 4) lacked oomph because instead of having a nice, tense back and forth, we kept getting jostled to and fro. (I would love to watch these two scenes minus the scene transitions to see if they work better.). All of this crappy pacing makes it hard to tell when something is happening relative to another scene.

Speaking of pacing, why is there ZERO buildup to anything?  We see Spender for the first time in years and within five seconds of him appearing, he’s hit by a car.  Meanwhile, we have Scully’s brain lighting up in Morse code to communicate with Mulder and Skinner so that they can know they need to “find him”.

Wait just a damn second.  What the hell did I write?  Did that  really happen???? I get that this is the  X-Files but this is treated like no big deal!  Seriously, Scully’s brain is  lighting up on a CATSCAN.  And Skinner, without waiting a second, claims it’s a signal.  What?! Why???  Skinner sounds like an idiot believing that.  Plus it was a completely unnecessary scene.   Scully woke up minutes later and told them this exact message so why did we need that scene?   It’s as if Chris Carter and the show no longer know how to do quiet scenes so we need someone constantly jabbering some gobblygook.

All of this rapid-fire and ridiculous pacing make the scenes of Mulder driving that more jarring and ridiculous.  It feels like they just stuck a camera in front of David Duchovny for hours and told him “go”.  Then they chose the best five minutes of footage and stuck it in haphazardly.   How about a change in the camera angle guys?

And the voiceovers….hahahahahahha!  Voiceovers are solid when used judiciously.  I don’t even mind them in Redux because in that episode, there was so much tension and drama riding on what was happening that they felt important.  Here, Mulder’s voice-overs basically were him saying “Gee I hope Scully is ok and boy I hate my father.” Its pretentious and came off as an SNL parody of the X-Files.  Plus, this was Duchovny at his worst as he channels Harrison Ford’s apathetic voiceover from Bladerunner and adds a dash of Duchovny boredom.

Those voice-overs expose a bigger problem.  This show used to have some of the most eloquent (if not completely natural) dialogue I’d heard on television.  Now it’s a  show that doesn’t even recognize how people talk anymore.  Scully keeps whining about “the Smoking Man” throughout.  When they used that name in the original show, it came about once or twice a season.  But it sounds ridiculous when its used fifteen times in an episode.  Then we have Spender talking to Scully and using the phrase “coming at me” three times in the same conversation.  But our dear old Fox Mulder tops them off.  His delivery of the line “now get out of my way!” is possibly the worst line reading I’ve ever heard.  That and him throwing a tantrum at Skinner by saying “you smell like smoke!”

Speaking of that scene, the confrontation between two of our beloved characters played out like a lackluster playground tussle.  Mulder throws his hissy fit and shoves Skinner.  Skinner looks around and has this look like “crap people are gonna think I’m a real square if I don’t do something” and then shoves him back?!  What did they do with my Skinner?? 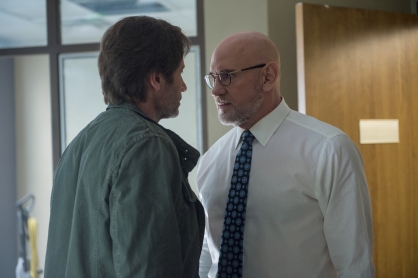 Spender:  Watch out Skinner…Mulder is coming at you.

And not to pile on to this episode but yegads man, the characterizations are weak.  Why is Mulder randomly skeptical at the beginning?  Why is Monica Reyes still a backstabbing rat when the original show never implied this?  Why is Mulder still so untrusting of Skinner???   You guys have been allies now for twenty years!  Why does he immediately think Skinner is in bed with the devil because he didn’t pick up his phone? Seriously Mulder would be the creepiest guy to be in a relationship with.

And finally…the twist.  The concept sucks.  It is disgusting and I was not very pleased to see that En Ami (an already creepy, lecherous episode) will be distorted based on this episode.  I really don’t like the treatment of Scully.  Its written very callously and you know that when she learns the truth (or maybe it’s a lie, who knows) it’s going to be handled poorly since it will probably be written by Chris Carter.  Basically, I am against the idea of her being a vessel for the storyline when it requires that she had to be raped and violated.  Especially since variations of this happened throughout the show.  It was handled much better than but not so well now.

But I do like that Skinner has something interesting  to do now.  He has knowledge that would be devastating to Mulder and Scully.   It ups the dramatic potential because, unlike the rest of the episode, it didn’t feel like forced drama that Skinner wouldn’t tell them about William’s real father.  And it is a much better driving force for our heroes than the ridiculous “we need stem cells from our son” nonsense.   All in all, this is a terrible plot point that at least has some compelling potential…which no doubt will be botched by one Chris Carter.

So all in all…this episode set up the groundwork for something that could potentially be not awful.  I mean, I would be a damn fool if I thought the follow up to this will be any good since this is somehow much better than last season’s mythology despite being it’s own sort of train wreck.  Plus I am watching for the MOTW at this point which I have heard are actually good.  I’ve raved about how bad this episode is but a part of me recognizes this as the nonsensical crap I have to sit through to get to the potential gold coming up.

Plus it’s just fun for me to have The X-Files back.  No matter how terrible it is, I still watched this episode with a grin on my face which is more than I can say about Season 10’s mythology.