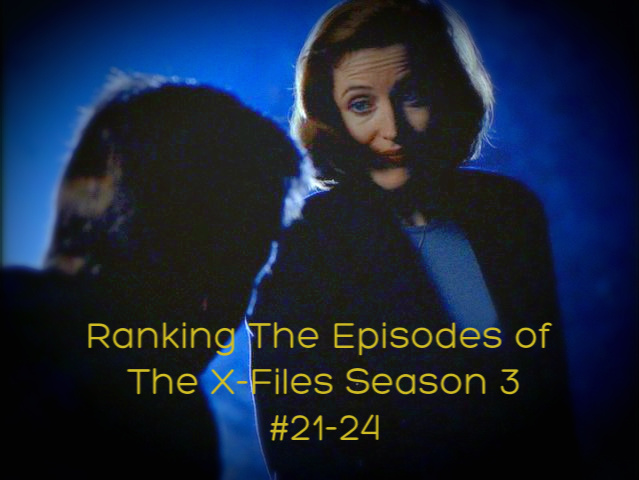 It’s been a while since I finished my Season 2 rankings.  During that hiatus I’ve changed some things about my life.  Most obviously, I’ve switched from ranking Season 2 to ranking Season 3.  Here we go with #21-24 of the third season!

Every X-Files fan knows which episode is the worst of Season 3 and that’s the much maligned Teso Dos Bichos.  I’m not going against that–this episode is pretty shoddy.  You can’t really do much worse than have killer cats be your paranormal phenomenon.  Oh wait, you can easily make it worse–just include a cat puppet show during your conclusion and voila!  Instant shit.

Couple all that nonsense with some unpleasant Mulder and Scully and you have a recipe for disaster.  Scully is unusually cold in this episode and it just feels like Gillian Anderson is not feeling it (don’t blame her).  Her attitude towards Bilac is kind of understandable but her snarkiness with the cop about “partial rat body part” feels a bit much.  Mulder meanwhile keeps saying “go with it Scully” which seems like Teso Dos Bicho’s version of “sure, fine, whatever” but has none of the charm or humor.  Forgive me but I like my Mulder when he’s clever and witty, not when he’s forcing the same joke over and over.

Alas this is Season 3 and even the bad episodes have merit (can’t say the same for Season 2 or especially Season 1).  The atmosphere until the terrible climax is actually very good.  All of the scenes in the museum are dark and creepy, with the scene of the rats escaping out of the toilets being particularly unsettling.  This is all helped by yet another awesome Mark Snow score.  It’s just a shame that the episode included–you know–killer cats.

After Chris Carter’s awesome directorial debut with Duane Barry one would not be wrong to expect all of Carter’s forays into the director’s chair to be successful.  Well The List is here to show that a dull script will completely mar solid direction.

Chris Carter the director handles The List fairly well.  There are plenty of creepy moments scattered throughout with the head in the bucket being a highlight.  The episode ends on a unique note with Mulder and Scully not actually solving anything but the warden having karma delivered to him right as the credits roll.   The atmosphere of the prison is suffocating (great set design) and the lighting has this greenish tint that gives The List it’s own unique personality.

Unfortunately, Chris Carter the writer does nothing to help. The story moves at a plodding pace and is fairly generic.  The characters are obnoxious in so many ways.  Neech’s wife is not given enough screen time and comes off as unsympathetic.  Parmelly is played by the great Ken Foree but his character is given nothing substantial to do.  Even Scully gets in on the act by inexplicably wandering around alone into the showers and locker room of a maximum security prison.  Come on Scully!  You’re lucky that the only person who ambushed you there was Parmelly (who apparently thinks the best way to get information across to the FBI is to lure a female agent into the prison showers and grab her from behind).

But worst of all is the prisoner dialogue.  Now I don’t know how much of this is Chris Carter’s fault because you can’t just have rampant cursing on network television but my god, this is not how I imagine death row inmates speaking.

Oh wait that is Chris Carter’s fault.  The following is an actual line spoken by a prisoner to another prisoner:  “You’s a dead man, Roque! You hear me?! I’m gonna peel that head like an onion! I’m gonna to break you off a big chunk! You hear me?! He ain’t gonna tell you nothing but a bunch of lies! You talk, punk, I will make you my Maytag!”

That’s almost as natural as the dialogue that Carter penned for the British characters in Fire.

Skinner is my favorite character and I wish the show focused on him more. There’s something about his no-nonsense demeanor that, when mixed with his papa-wolf behavior towards our dynamic duo, puts me in a state of bliss.  He’s just pure awesome.

Its just a shame that his first occasion being in the spotlight is so forgettable.

There’s good elements here.  Mitch Pileggi is awesome as usual as Skinner.  The first 15 minutes are very effective as we meet Skinner’s wife, glean little nuggets of info about him, and watch him get laid onscreen before either Mulder or Scully does.  Skinner trying to maintain a cool facade while his life is crumbling around him is fun as is seeing Mulder and Scully go above and beyond to try to exonerate him.

But the back half of the episode always loses me.  The revelation that the Smoking Man is behind all of this is far less interesting than if the succubus was actually a threat to Skinner.  And also, what the hell was the point of the succubus?  I think she gives Skinner the information he needs to stop the killers at the end but that seems like a criminally inept way of utilizing a succubus.  (Though it gave me a chance to use the word “succubus” which is one of my favorite words.)

Also, I feel like the melodrama just ramps up to another level towards the end.  The lighting in the FBI building during Scully’s interrogation is hilariously dark and it comes off more like a spoof than an actual scene.  Meanwhile, the scenes with Mulder and Scully attempting to set a trap for the assassin paint them as two of the most inept FBI agents ever.  Seriously, they nearly get their witness killed because they have no concept of how to be stealthy or for how to manage a secure area.

But really, what bothers me is that this episode about Skinner ends up being too focused on Mulder and Scully.  I get it, they are our main characters and we love them…but Skinner ends up feeling like a guest character in an episode that is clearly intended to be his.  Going back to that interrogation of Scully…that scene is all about Scully and her work on the X-Files with Mulder.  Skinner feels secondary which is not how this should have been handled.  Zero Sum would handle this much better next season.

The Walk may not be my least favorite episode of the season but it sure as hell is the most annoying.  Every time I watch this episode, I feel like I should be enjoying it more than I do.  Similar to Maggie Holvey in The Calusari , General Calahan’s life falls completely apart over the course of 42 minutes, right down to the brutal murder of his child.  When the episode taps into Calahan’s crisis, we get some strong drama and emotion.  Plus,  the set pieces are the phenomenal with the swimming pool and sandbox scenes standing out.  Rob Bowman does a stellar job as usual and it feels like The Walk checks off all the boxes.

And then we are introduced to Rappo.

Rappo–my dear Rappo–you are possibly the most annoying villain to grace the annals of The X-Files.  Seriously.  He is awful.  I get his character motivations, I get the betrayal he feels at the hands of his commanding officers, and I get that his condition should make him sympathetic.  But Rappo–fucking Rappo–just shut the hell up.  Every scene he is in is indescribably annoying and Ian Tracey’s performance is grating and lacks any nuance.  It’s all one note and removes any and all sympathy I should be feeling for his character and brings this episode plummeting down to #21.